The State of Injustice

“The Little steps we take make for Giant Strides later”
Take your time reading this page; consider these issues carefully so that when you relate these issues to other people you fully understand what you are talking about – this understanding can only expand the depth of your consciousness.

You do not have to ‘Agree’ with this nor any other ‘Issue I am Raising’ but the conscious awareness that there are in deed ‘Issues’ impacts upon both ‘You through that Awareness’ and the ‘Whole of Humanity’ by making people ‘Realise through Understanding’ that some ‘Problems within Authority’ needs to be dealt with.

“I cannot change the World upon myself however I can become Conscious through Sympathetic Awareness with my actions impacting upon others thereby having a Cumulative Effect”.

As you browse the internet searching out cases of ‘Injustice’ there are some ‘Issues’ you will discover more than any other:

1.      The sheer scale of ‘System Abuses’ by the people ‘We Elect’ into ‘Office’ with that ‘Election’ being based upon ‘Trust’; their ‘Failure as People’ is that they are ‘Completely Untrustworthy’ they project ‘False Claims, Images and Promises’ with ‘No Intention of Honouring them’ additionally they are completely ‘Indifferent’ to both the ‘Public as Individuals’ and their ‘Nation as a Whole’ this clearly highlighting an ‘Intent’ upon their ‘Part to Deceive, Defraud and Betray’ the ‘Public’ (US).
2.      Many Serious Issues are ‘Drowned’ beneath the ‘Scale of the Crimes’ all of which deserve ‘Scrutiny’; in addition to this ‘Not one single Agency on Earth is visibly dealing with these Issues’. Furthermore neither the ‘Court of Human Rights’ nor any other ‘System’ is actively ‘Coping’ because they are ‘Overwhelmed by the Sheer Scale of Political Abuses’ which are being ‘Expressed and Projected by the Peoples’ from within ‘Every Country’.

The fact that this is a Global Issue highlights a far greater Problem all of which relate to Authority through Political and Judicial Abuses.
3.      Realistically this is a ‘Global Problem’ which relates to ‘Every Country on Earth’ and can be put down to: ‘Firstly Us’ each and every one of us has to take 'Responsibility' because of ‘Complacency’ on ‘Our Part’. Additionally: ‘We All Delegate Far Too Much Authority’ entrusting it to ‘Other people’ none of whom are ‘Trustworthy’.

The problem here is that it allocates for ‘State Failures’ and ‘State Crimes’ because the ‘Minority Groups’ whom ‘We Elected into Office’ as ‘Our Officials’ and whom we ‘Trusted’ to provide us with ‘Lawful Service’ (Don’t) with all of them having ‘Exceeded their Authority’. The ‘Fact’ is that ‘All the Systems’ (Government) only retain their ‘Positions of Power’ through ‘Abuse of the Publics Resources’ (Money/Revenue) all of which is ‘Directed against the Public’ so as to ‘Inhibit and Restrict’ them from ‘Seeking Justice’ this ‘Despite the Abuse’ (System Failure).

“The Problem is Guilt with a Failure upon the Part of the State to Take Responsibility for its own Failures”.


Everyone ‘Assumes’ that they are dealing with ‘Human Beings’ but ‘You are Not’, you are dealing with a ‘Minority Group’ of ‘Politicians’ who only retain ‘Authority’ through the measure of their ‘Indifference’ to you and your case this coupled by the extent to which they ‘Abuse Your Resources’.

You have to understand that ‘All Politicians’ are ‘Politically Motivated’ therefore they ‘All’ have ‘Hidden Agendas’ with ‘None of those Motives’ being for ‘Your benefit’ and ‘All these Ambitions’ are being ‘Funded’ through the ‘Abuse of Your Resources’ – they are all just ‘Devious Little Men’ whose greed gets in the way of their ‘Responsibility’ and that is to ‘You’ it called Lawful Service – and that is their ‘Achilles Heel’ since they are ‘Bound in Law’ to provide you ‘The Public’ with ‘Lawful Service’ and as ‘Public Employees’.

Here lays the ‘Problem’ because if ‘You the Public’ are not receiving ’Lawful Service’ from them then they are not ‘Providing You’ with what they are ‘Employed to Deliver’ so like any other ‘Public or Commercial Service’ (Fire them) by ‘Withdrawing Revenue’ upon the ‘Grounds’ of: ‘Failure of the State to provide Lawful Service’ this is something they are all bound in law to do.

No ‘Public Employee’ whether they are ‘Politicians, Judges, Police’ nor any other ‘Public Servant – Senior or Ad ministerial’ has a ‘Lawful Right to Lie, Deceive or Betray both the Public and the Nation’ since you (the Public) employ them to provide you with ‘Lawful Service’ in the form of the ‘Actual Non-Distorted Truth’ coupled with ‘Legitimacy and Lawfulness’.

A ‘Judge’ is bound in ‘Law’ to represent both the ‘Public in Law’ in addition to the ‘Law’ itself by ‘Upholding the Legitimacy of Law’ through his ‘Actions’, he has no ‘Lawful Right’ to express ‘Prejudice nor Perversion’ and within this ‘Neither the Public nor the State’ has a ‘Lawful Right’ to influence the ‘Outcome of Justice’ through the ‘Perversion of that Judge’.

The ‘Police’ are bound by the same constraints of ‘Law’ to provide the ‘Public with Lawful Service’ as are ‘Politicians as Public Representatives’ with any ‘Failure to Deliver Lawful Service’ being their ‘Failure in Law’ – Justice is a Profound thing.

You can discover more on this if you investigate some of the ‘Issues’ projected upon the ‘Paw-Lew.com’ and ‘Paw-Lew.co.uk’ websites.

5.      I have an Issue which affects every British and American Citizen – “Are we in a Recession?” or “Are your Governments Impoverishing ‘Us’ their ‘Nations’ through ‘Financial Abuses’ and ‘Constraints’ all of which are ‘Draining’ the ‘Economies’ of ‘Our Resources’ and all of which are being ‘Governed, Driven’ and ‘Directed’ by ‘Political Ambitions’ as a bid towards ‘World Order’ – in support for the ‘Anti Christ’ – Anton, Antony or Anthony – Anton Iblis who is named by a King and Prophet named Elijah in the Great Koran, he is also named and recorded in the Bible and the Torah – TRUTH without Prejudice for that is the TRUTH.
6.      There is an ‘Issue’ here; since your Governments actually are funding ‘’ the which actually is the kingdom of the Belgae which was Bell/Belos/Beloch/Belog. This is the ‘European Government’ which will become the ‘World Government’ in due course (New World Order) additionally ‘All’ of this is being done using ‘Your Resources’ which have been extracted (taken) ‘Without Your Consent’ since you ‘Do Not Have a Lawful Say in It – Do You?’

An ‘Issue’ here is that if this is the ‘Truth’ then ‘You’ are ‘Sanctioning’ and ‘Supporting’ the ‘Anti-Christ’ of ‘Earth’ against (A) GOD be him Jehovah, Allah, Duw or Deus or God (the Devine Being and Creator). (B) his ‘Son’ who is ‘Prophesised to Come’ with him being ‘Krishna’ (by the Hindu and Seeks) called ‘Christopher’ (by the Jews and Muslims and ‘Christ’ (by the Christians). He is also projected within other cultures around the world with ‘All’ of them ‘Projecting him as the Son of God’ and all these cultures represent and relate to him as ‘Projecting Justice’ coupled with ‘The Sword of Truth’ which is ‘The Word of God’ being ‘Neither Distorted nor Perverted’.

Within the above and for the record your ‘Authorities as Governments’ have:

Firstly through their ‘Actions’ they have ‘All Accepted Roles’ within the ‘New Global Administration’ all of which is ‘Treason against You’ (the Public) since it is ‘Not Publicly Sanctioned’ and/or ‘Endorsed’ by the ‘You’ (the Public) but done ‘Dishonestly’ and without your ‘Consent’ – “Are you even Aware of how much money is being diverted away from you to Fund this Crime against Humanity” – Clearly the Enslavement of Humanity through Impoverishment and Taxation is a Crime.

Secondly and My ‘Issue’ here is this: ‘That at no time within the ‘Past’ have they ‘Your Government’ and/or their ‘Representatives’ asked or requested ‘Permission from You’ (the Public) to ‘Take these Moneys’ which are being ‘Extorted through Revenue’ (Without Consent/Permission) and which are actually ‘Your Property’ (Resources). Furthermore through this ‘Criminal’ and ‘Fraudulent Action’ these ‘Revenues’ are being ‘Used and Diverted Out of your Country’ so as to ‘Fund’ and ‘Finance’ an ‘External Government’ which you have ‘Not Elected’ (it is therefore Not Sanctioned) and to which has ‘No Authority Over You’.

Clearly this is a Crime since ‘You the Public’ have not ‘Relinquished Your Sovereign nor your Independent Rights’ to (A) Your Freedom and Independence, (B) Your Sovereignty (Land Rights) as Independent Countries or Nations, (C) Additionally you ‘Elected’ your ‘Government to Serve You’ with ‘You Pay them to Provide You with Lawful Service’ and within that ‘Your Government has No Right in Law to Submit to the Authority to Any Other Internal or External Body’ (Foreign or Domestic).
7.      Compounding the ‘Above’ is the ‘Abuse of Law’ with any ‘Action’ your ‘Authorities’ have either ‘Sanctioned, Endorsed and/or Committed you Too’ against ‘Your Approval’ and ‘Without Your Consent’ as a ‘Nation’ (The Majority) being ‘Illegal’ therefore ‘Negated in Law’ (those Contracts and Actions are Void) since they are by any ‘Definition’ – ‘Illegal’ (Not Lawful).
8.      For the record: I do not have the ‘Right in Law’ to spend ‘Your Money’ even if ‘You Entrusted Me with those Resources’ since that would be a ‘Breach of Trust’ – therefore a ‘Crime’.

I do not have the ‘Right in Law’ to sell ‘Your Rights in Law’ to any ‘External Regime’ as that would be ‘A Defined Crime in Law’ (Treason) even if it was ‘Your President or Prime Minister’ committing that ‘Action’ (The nations Rights belong to the Nation and Not any one man or Minority Group – Elected or Not has or had the Right to Sell them or Sign them Away).

The ‘Issue’ here is that ‘Like France’ their ‘Government’ did not ‘Stand and/or Declare’ to their ‘Nation of People’ an ‘Intention to Relinquish their Nations Sovereignty’ with that ‘Failure to Disclose their Intention’ undermining the ‘Legitimacy of the Action’ – this same ‘Measure of Disclosure’ effects every other ‘Independent Nation in Law’ because there has to be ‘Legitimacy within the Law’ with any ‘Failure of the Law to Stand Legitimately’ or to be ‘Upheld’ thereby ‘Accountable in Law’ – ‘Negating and Undermining the Legitimacy of both the Action and the Law – this Failure undermining both the ‘State’ and the ‘Law’ itself with those ‘Actions Committed to by your Representatives’ becoming ‘Void in Law’. (The action was not Sanctioned by You since they did Not ask for Permission so it was not a Legal Transaction – was it?).

9.      The other issue here is ‘Fraud’ since ‘Your Nations Resources’ are ‘Your Property’ with them being ‘Unlawfully Extracted’ and ‘Misappropriated’ by a ‘Minority Group’ with ‘Intent’ and that ‘Intention being Unlawful’ since it is not ‘Sanctioned by the Public’ whose ‘Resources they Are’ – ‘This is a Definitive Crime’.

‘Eirin’ the ‘Prophetess’ told the ‘Brythig Peoples’ he would come out of the ‘White Lands’ as ‘Blaidd Rhydd’ (the Free Wolf) 3,500 years ago; that they must prepare for his arrival – “Er Côf âg êr Deuthan’t” – ‘Remember for here He Comes’. 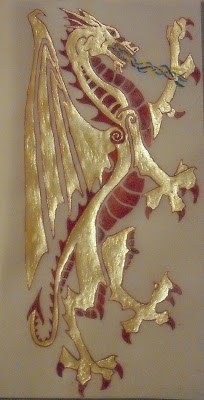